Leaving a career to serve the Lord…

In the 1980’s, Stan and his family moved to Uganda to work with Campus Crusade. This was a major life change for the family as his educational background was in Business and Hospital Administration which culminated at Harvard Business School and UCLA. His first 15 career years were immersed in the marketing and management in industry for a large corporation. He eventually established a hospital management company involving 55 rural hospitals in 17 western states.

While in Uganda, he piloted the first CHE programs seeking to break cycles of poverty and disease by bringing education into homes along with the good news of Jesus.

In the 1990s, Medical Ambassadors asked Stan to come on board and help them rethink how they were doing missions.  Medical Ambassadors was founded with the idea of sending medical personnel to rural, poor communities to host free clinics.  Their experience led them to the conclusion that their clinics were “recycling centers”.  People would come, receive medical care, go back to their homes and the same environment and come back to the clinic a few months later with the same sickness.  Stan’s approach, through Community Health Evangelism, seemed as if it would address the issues in the home itself–and it did!

The best “boss” ever…

When Terry and I came home from the Philippines in 1996, God had put on our hearts the need to reach people wholistically. We served as Church Planters for ten years and came back with questions of how-to best care for people who were living in poverty–both physical and spiritual poverty.  Those ten years were vital in preparing our hearts for what God had for us.

While speaking at Trinity Baptist Church in Mesa, a man by the name of Don Orvis came up to Terry and said, “I think I know an organization who needs you!”  Medical Ambassadors was looking for someone to oversee their work in the Philippines.  They contacted Terry and sent him an overview of CHE. Terry saw that CHE was what we had been looking for…a way to lift the poor out of the poverty, giving them dignity and bringing them to Jesus.

Stan trained and mentored Terry and the work thrived under Stan’s leadership. Work that started in the Philippines multiplied throughout Southeast Asia.  Stan did the same thing for potential leaders in other parts of the world. The result was a global movement. Stan did not control, but allowed those he trained the freedom to grow, try new ideas and lead.

Having an open hand has been a characteristic of Stan’s life.  All CHE materials are open source–not copyrighted, by Stan’s design.  He wanted the materials to be used in the Kingdom of God.

Terry has what Filipinos would say is “utang na loob” or a debt of gratitude for Stan’s involvement in his life–as do so many around the world.  Happy Birthday Stan! We pray God’s richest blessings on your life in the coming year! 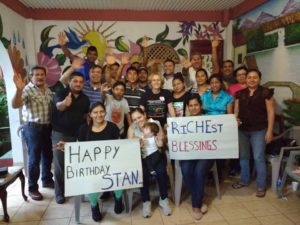 Items for Prayer and Praise: